Kevin Monahan was kind enough to chime in on my question on the Adobe forums concerning what Adobe means when they say Adobe Premiere Pro Next will include full support for MXF-wrapped Avid DNxHD files. Turns out they really mean full support, including timeline preview rendering and smart rendering during export. 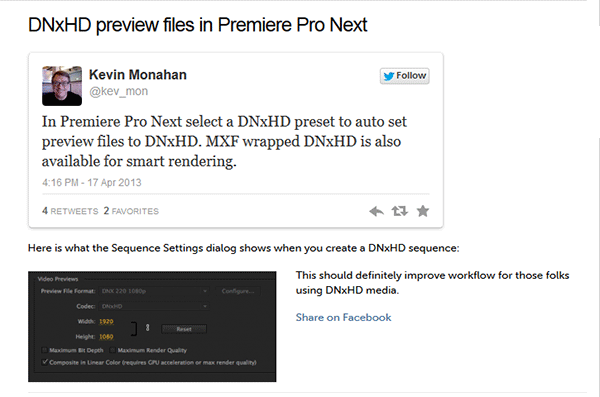 While Karl Soule described an end-to-end smart rendering workflow with Apple ProRes on Mac, this next release introduces a true industry-standard, cross-platform intermediate workflow into Premiere. This is a boon to editors who prefer to spend time rendering up-front to an intermediate codec rather than spend time fully rendering on export. Editors can choose to edit natively or work more in line with their brothers on Media Composer.

It’s not an in-your-face glamorous new feature, but it’s the kind of feature that shows Adobe listens to and understands its editors.