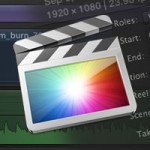 If you’re a trailblazing user of FCPX, 10.0.6 or newer, you may have noticed a bug: rendering your project after using certain effects leads to random frame glitches. According to Aharon Rabinowitz of Red Giant Software, the problem lies with FCPX and Apple. While Apple is aware of the issue, there has been no information on any upcoming patches.

In an earlier blog post, the Red Giant Team points to a workaround: rendering your project directly in Compressor. This isn’t ideal for users who don’t already own Compressor, an app sold separately from FCPX.