The dreaded part of any digital imaging tech’s existence: the DIT camera report. After working as DIT on several sub-million dollar budget features, television pilots, commercials, and other smaller productions I’ve developed a DIT camera report that helps me keep track of the footage I’ve processed and gives the editor or assistant editor enough information to know where certain footage is.

Edit: It appears the Mac version of Excel 2011 adds borders around cells randomly. If there are any Excel geeks better than me who have a solution, I’d love to hear it. 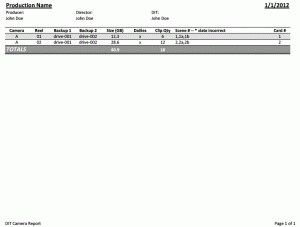 There are a few things worth noting about how I, and hopefully you, log camera and footage info:

The report prints best in landscape mode with small margins.

Columns Backup 1 and Backup 2 are columns allowing you to note which hard drives the footage was backed up to. Unless you’re lucky enough to have a DIT cart with a proper RAID array, you may be using two or more backup hard drives. I personally mark each drive with the production initials and a number, so I may start a shoot backing up footage to “DWOE-001″ and “DWOE-002″ and then eventually to “DWOE-003″ and “DWOE-004″. I fill these slots in as memory cards are offloaded: a visual indicator that backup process is complete.

The Dailies column is marked with an X when I successfully process dailies from the original camera footage. Dailies may mean different things to different people: processing DNxHD editorial files for some, or simple h.264 Quicktime files for viewing at a later date.

For the Scene # column, I mark any scenes with an incorrect slate with an asterisk. Another small feature to help the editor.

The last column is Card # which doesn’t seem entirely intuitive. Card # is a simple number assigned to each memory card at the beginning of the shoot and marked on the card with paper tape for the duration. The DIT camera report includes a sheet for a memory card report as a place to note type, manufacturer, and serial number of each memory card among other things. This level of reporting helps track any particular cards that are corrupting data or, on long documentary or feature shoots, help you duty cycle memory cards.